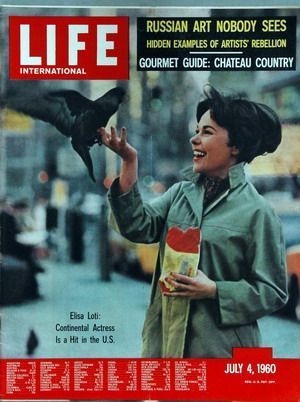 Jenny Lyn's mom, Elisa Loti, on the cover of Life. Headline is "Continental Actress is a Hit in the U.S." She would later go on to win an Obie Award and a Theatre World Award and also to become Jenny Lyn's Mom.

Frequently Asked Questions:
Q: Why is your name spelled wrong? Shouldn't it be Jenny Lynn Bader? But no, it's Jenny Lyn Bader, with one 'N.'
A: My mother (pictured at left, feeding a pigeon) didn't want me to be called just Jenny Bader, the name Jenny was so popular at that time that if you said Jenny in a crowded room five or six girls would turn around... At one point even if you said Jenny Bader a couple of girls would turn around... Actually, she named me after the opera singer Jenny Lind. But she wanted me to have my very own spelling!

Q: The girl in your play None of the Above who answers the door expecting her drug dealer and finds her S.A.T. tutor - she's based on you, right?
A: No, I had neither a drug dealer nor an S.A.T. tutor. But I still managed to make it through life at The Dalton School.

Q: Ah Ha! So the Billington School in the play is based on The Dalton School?
A: Oops! Yes, while the characters are invented the world of the school is real. And the school names share the syllable "ton." Actually in a sense the "Billing" part is shared too... Hm!

Q: So seriously are the girl and the tutor people you know?
A: No, I really did make them up.

Q: We are casting a production of None of the Above and two seventeen year old girls auditioned, one looks closer to 14 and one looks closer to 20. What should we do?
A: I'd be careful about that. Depending on how young Clark looks, the play won't completely work if the girl looks too young.

Q: Do you imagine Jamie to be blond, necessarily?
A: No.

Q: Does Clark need to wear glasses?
A: No.

Q: I have more questions! Can I email you about my production of this play or another of your plays?
A: Yes, I'll be happy to answer them (assuming I'm in a place where I can access email).

Q: Did you guys fight a lot while you were writing the book?
A: Yes. We fought by phone and e-mail. Our phone fights are chronicled in "The Arguments" (Appendix 1) and our e-mail fights in "The Correspondence" (Appendix 2). We also had a fight about whether to publish the fights, but that one is not included.

Q: But it's the same book?
A: Yeah, except it's grown an inch both length and width-wise! If you don't believe me order an old and a new copy. The text is the same though.

Q: I hate playwright web sites that don't have any script excerpts. Can't I read a scene on here?
A: You can! I have some excerpts on the Reviews page.

Q: I've read the excerpt of Manhattan Casanova in the Vintage collection Leading Women/the excerpt on this web site but I can't find the full-length play anywhere! Is it published in an acting edition?
A: No, not at the moment, but drop me a line and I can likely arrange for you to read it!

Q: In the picture in the New York Times feature about Manhattan Casanova there are 5 actors, but aren't there 6 characters in the play?
A: Doubling one role may be possible.

Q: Seems there's a lot of ways to spell your name wrong, huh?
A: Oh yes. I've seen Jennie Lynne Bader, Jenny-Lyn Bader, and, for those who think I'm related to the actor Mark, Jenny Linn-Baker. And many, many more. In programs or even in favorite publications or a random mention here or there. Sometimes things get lost in translation. It's okay. There's a long history of alternate spellings. I'm only a small part of it.