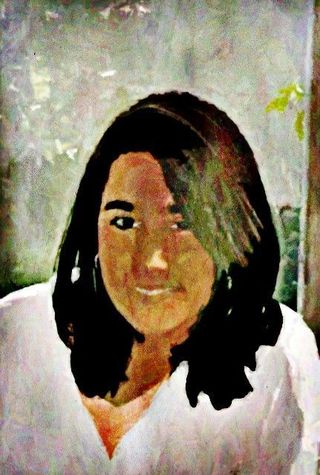 Warning: this bio contains too much information. 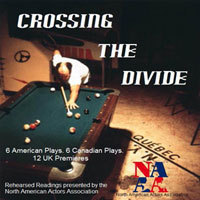 In Flight was featured in London's NAAA Fest, Crossing the Divide 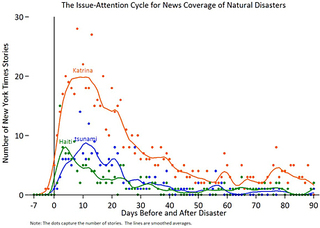 Decline of the American Attention Span, as shown through news cycle 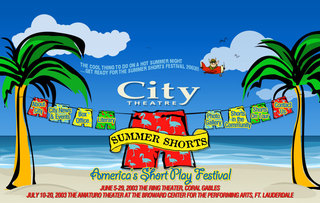 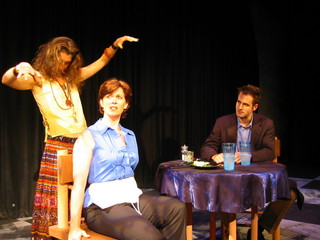 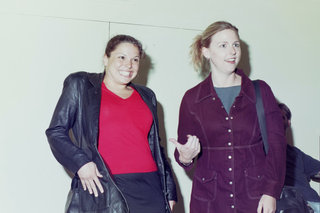 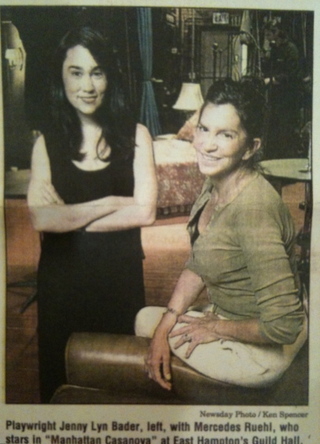 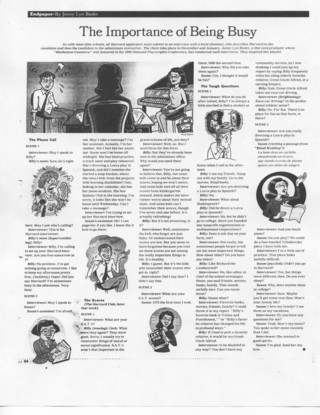 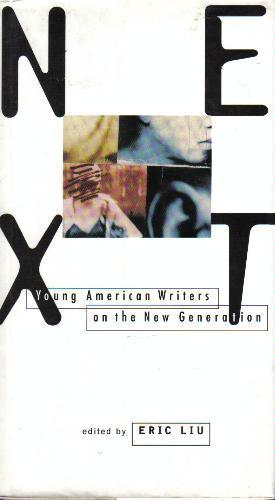 "Larger Than Life" originally appeared in this collection, NEXT. 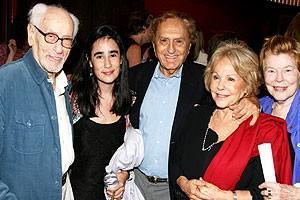 With Eli Wallach, Joe & Elisa Stein, and Anne Jackson at the opening of None of the Above 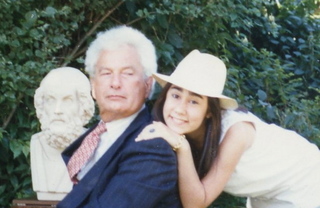 This page asks: how endless can an endless bio be? Read at your own risk! It would not be a good idea to print it out and use it for, say, a program. Don't use it to introduce Jenny Lyn Bader or you will find yourself behind a podium, rambling. No, no. It's more of a romp. Please return to the homepage for an easily digestible cv.

A playwright and author, Jenny Lyn Bader has written plays including Mrs. Stern Wanders the Prussian State Library (Luna Stage), None of the Above (New Georges), Equally Divine (Theatre at the 14th st. Y), and In Flight (Turn to Flesh Productions/Workshop Theatre).  In 2019, she was an Athena Theatre fellow and received the "Best Documentary One-Woman Show Award" at the United Solo Festival. In 2020 her play cycle The Age of Trump was first performed by the La Jolla Ensemble and Equally Divine was running at the 14th St. Y when the pandemic came along.

With theatres closed, Jenny Lyn has been working on many virtual productions including Guru of Touch (Edinburgh Festival Fringe), My First Time (Voting Writes), A Wonderful Stroke of Luck (Urban Stages), Play in Your Bathtub (This is Not a Theatre Co), and Strange Happenings at the School Library (Luna Stage).

She co-founded Theatre 167, where she served as Artistic Producer and has also been Director of Artistic Development, Writer in Residence and general co-conspirator. There, she co-authored 167 Tongues, You are Now the Owner of This Suitcase, and Jackson Heights 3AM, a Channel 13/PBS.org pick of the week. In 2013 she co-produced all three plays in rotating repertory in Manhattan, in a six-hour epic known collectively as The Jackson Heights Trilogy. For Theatre 167 she also served as a lead artist on the Jackson Heights Trilogy Immersive Experience (Queens Museum International), co-authored I Like to Be Here and The Church of Why Not, wrote History of Communication (Queens Theatre World's Fair Play Fest), and co-produced Pirira (NYITAward, Outstanding Premiere Production), Church of Why Not (Randall Wreghitt New Producer Endowmen Award), and Mourning Sun. In 2015 Theatre 167 received the Caffe Cino Fellowship Award for consistently producing outstanding work.

In 2014, Jenny Lyn was the featured playwright in NY Madness at the Cherry Lane Theatre. Her theme was "Free Advice." She performed her piece Mona Lisa Speaks at 167 Block Party and at Emerging Artists Theatre.

Jenny Lyn co-authored How We Are Connected: Caribbean with J.Stephen Brantley, developed and directed by Ari Laura Kreith and staged at the Museo del Barrio and the Brooklyn Museum in fall 2012. She was commissioned by the York Theatre to write one of the musicals for "Bespoke Musicals," and with Ben Morss wrote Serious Music produced in winter 2013 at the York, directed by Patricia Birch. For Half Moon Theatre that season, she wrote Pink, Grey, Maroon, seen at their one-act festival in May 2013. For Cindy Cooper's event "More Jewish Women You Should Know" at the Anne Frank Center she wrote Mrs. Stern Wanders the Prussian State Library, a piece about Hannah Arendt. Jenny Lyn also played the role of Hannah Arendt in the presentation, opposite Scott Schafer as a member of the German political police. And she was invited to participate in NYMadness, with the theme of "Outsiders" chosen by guest playwright Saviana Stanescu, at Urban Stages. She wrote The Nicest Time of Year to Go Door to Door, directed by Julie Kramer and featuring Amy Wilson, Alyssa May Gold, Claudia Schneider, and Colette Bryce. 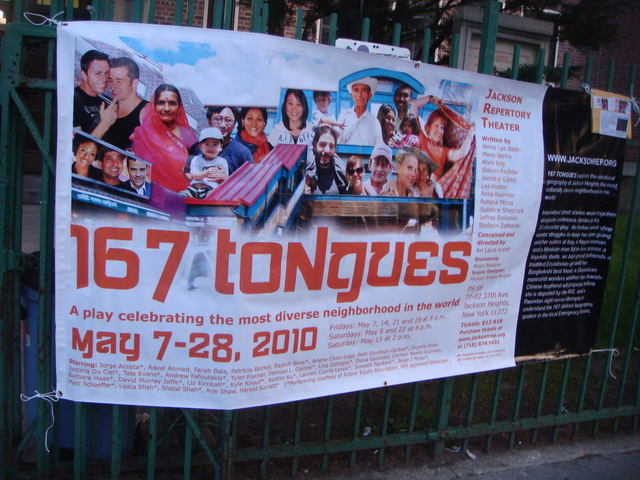 Her play Mona Lisa Speaks, commissioned by Core Ensemble, has been performed at the Berklee College of Music in Boston, Kravis Center for the Performing Arts in Palm Beach, and University of South Carolina, using an actress and three musicians.

Her verse play In Flight, a comedy written in heroic couplets, won the 2009 NAAA Festival and received a festival presentation at the Bridewell Theatre in London.

Her play None of the Above received its world premiere downtown at New Georges, introducing Alison Pill in her professional stage debut, and had its Off-Broadway premiere at the Lion Theatre on Theatre Row, where former Outer Critics Circle President Marjorie Gunner called it "easily the best play of the season." In an alarming footnote: well before the play was produced, the editor of the Education Life section of The New York Times asked Jenny Lyn if she could publish an excerpt but Jenny Lyn listened to the advice of her then-agent and declined the offer. (!) However the editor then convinced her to write a short play for the Education Life section, which she did ("The Importance of Being Busy").

Her comedy Manhattan Casanova premiered at Hudson Stage Company in Westchester and was featured in the National Playwrights Conference at the O’Neill Center, where it won the Edith Oliver Award named for the New Yorker critic for the play that, "in the spirit of Edith Oliver, has a caustic wit that deflates the ego but does not unduly damage the human spirit." The play is excerpted in Leading Women: Plays for Actresses, vol. 2 (Vintage).

Due to the shrinking of the American attention span and the rise of short play festivals, she has written many one-acts. Actors Theatre of Louisville commissioned her to write Worldness, which premiered in the Humana Festival of New American Plays as part of Heaven and Hell (On Earth): A Divine Comedy. That dramatic anthology is published by Dramatists Play Service in an acting edition and in Humana Festival 2001 (Smith & Kraus). Worldness also appears in Best Scenes of 2001 (Smith & Kraus). Primary Stages invited her to write The Popcorn Sonata which was optioned for publication by the Guthrie Theatre for the collection Best Ten-Minute Plays for 2 Actors: 2004 (Smith and Kraus) edited by Michael Dixon. The play was produced in the Summer Shorts festival at City Theatre in Florida and performed at the Ring Theatre in Miami and the Broward Center for the Arts in Ft. Lauderdale. City Theatre then commissioned her to write a play for their Shorts 4 Kids series.

One-acts, like so many of us, need companions so Jenny Lyn also creates cycles of interconnected short works. Her play cycle Emotionally Correct was produced at Center Stage NY. Her cycle Out of Mind: 7 Short Plays with Some of the People Missing was produced at Stamford Fringe Festival, Henlopen Theatre in Delaware, and NYU/Strasberg. Her Superstore Cycle, commissioned by WORKS Productions, was presented at Readers Theatre/Barnes & Noble at the B&N Lincoln Square branch before they turned it into a Century 21. Perhaps the Department Store Cycle will have to be next.

(For this last play, Jenny Lyn also composed music for a radio play-within-the-play, "The Brave Little Widow." She kept thinking the director would replace it with real music but instead they not only kept her composition, they made her play the piano on the recording.)

Should you need one, here is a list of her published plays:

Inauguration in She Persisted (Applause, forthcoming)

I Went There in Best Scenes for Kids (Applause Cinema and Theatre Books, 2015)

One Night at Your Local Superstore in Best 10-Minute Plays: 2007 (Smith & Kraus)

In 2011, she received script commissions from the John Drew Theatre at Guild Hall, the Astaire Awards (including special material for Bill Irwin), Mile Square Productions, and Oceanside Productions, for which she wrote Oppression and Pearls,a play seen during the Los Angeles run of Standing on Ceremony: The Gay Marriage Plays, starring actresses including Julie Hagerty, Caroline Aaron, Mary Lyn Rajskub, and Amy Brenneman.

With Bill Brazell, she co-authored He Meant, She Meant: The Definitive Male-Female Dictionary — What Men Think They're Saying, What Women Really Mean (Warner), published in Italy as Secondo Lui e Lei (Sperling & Kupfer). In Italy, her book has been hailed as "the most extraordinary invention for sex life since The Pill."

Her articles and musings have shown up a bunch in The New York Times too, particularly the "Week in Review." She has also written for other sections of the paper, including Sunday Styles, House & Home, Culture, Sunday Book Review, Circuits, Education Life, and Real Estate. While at college, she served as campus stringer for The New York Times. Her Times pieces include:

She has also written for publications including The Lincoln Center Theatre Review, The Next Progressive, and The National Law Journal.

Her essay "Larger Than Life," commissioned by W.W. Norton & Co. and first published in Next: Young American Writers on the New Generation (Norton), has been reprinted in Who We Are (St. Martin’s), Signs of Life in the USA (Bedford), Ethics (McGraw Hill), The Blair Reader (Simon & Schuster) American Voices (Mayfield), Progressions: Readings for Writers (Norton) and other collections. The essay has been used as a central text in Signature Series for American Vision and Values and in other courses.

She wrote both seasons of the web serial drama Watercooler (MSN), produced by Hearst New Media for the Microsoft Network. Out of over 30 "shows," Watercooler was one out of two chosen for renewal for a second season. In the early days of the internet, she served as forum editor and chat host for the Books and Theatre forums on the New York Times on America Online. After coming across some current online chatters wondering about the fate of those turn-of-the-millennium chat logs, she recently tracked down some of those archival materials.

In 2002 she worked on a film script with the legendary Iranian director Amir Naderi, a workaholic who called to ask her about rewrites when she was in the car on the way to her wedding.

The first one-act she wrote that was staged was at her summer camp, Buck's Rock. It was Shock Treatment and was featured in an evening of plays entitled, "Three Short Plays in Ten Short Days." The following summer perhaps her most avant-garde work, Waking to the Rain, since lost, was also staged at the camp.

She was a 2002 Lark Playwriting Fellow, nominated by Wendy Wasserstein, and a 2010-2011 Lark Core Artist Fellow (Monthly Meeting of the Minds). She belongs to the League of Professional Theatre Women and curated Jackson Heights 3AM as one of their 30 plays/30 years anniversary offerings. She has been named the playwright in residence of the Mirror Rep, New York's most established alternating repertory company, founded in 1983. Her scripts are represented by Paradigm; her book agent is Joy Harris. A member of the Writers Guild, the Dramatists Guild, and the Authors Guild, she is married to Roger Berkowitz, a professor of political studies, human rights, and philosophy and Director of the Hannah Arendt Center for Politics and the Humanities at Bard College.

The truth is even an endless bio ends... Eventually.